Rafa Nadal and Dominic Thiem played the match of the year

?Enormous effort for both players and the emotions of the fans to the maximum in the quarterfinals of the US Open, lasting 4 hour and 49 minutes.

?With this victory of Nadal, the world No. 1 heads to his 29th Grand Slam semifinal and moving to No. 4 on the most all-time Major semifinals list, ahead of Ivan Lendl.

Rafael Nadal got the semifinals of the US Open after a match of almost five hours against the Austrian Dominic Thiem.

Dominic is a great colleague and I feel sorry for him. When you get to this situation in the fifth set, 5-5 in the tie-break is a coin on the air.

Rafa is a great guy but he doesn’t want to lose against anyone and almost all the time he plays great games. I hope we have more in the future with a different ending.

The reactions to this unforgettable match came from everywhere:
@rolandgarros said,

What a performance from both players. Unfortunately one had to win. @RafaelNadal defeats @ThiemDomi 06 64 75 67 76 and qualifies for the semifinals. Great respect in so many ways Domi . Your time will for sure come very soon. #ultimatebattle #USOpen

I know damn well I had no business staying up this late, but I’m so glad I did! Nadal-Thiem #USOpen50@RafaelNadal

Tennis is boxing without the violence. Another example yesterday as Rafael Nadal and Dominic Thiem fell into each other’s arms after knocking lumps out of each other for nearly 5 hours. Emotional to watch. 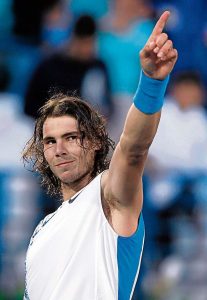 The Passion of Tennis

The Prowess of Tennis

CATAN:The most successful board game of all time

Madrid hosts the European Final of 'League of Legends'